Posting to preserve this video of Neil Patrick Harris reading my tweet:

My latest #RunChi post is up. All about the benefits of working with a training group. Plus, a pre-half marathon photo of me and my running buddy before we were overheated and exhausted.
Posted by LDA at 7:20 PM No comments:

I finally caught up with the pictures Dave took from his spot on the path during the race. This was at about 10.5 miles. I was very happy to see them! 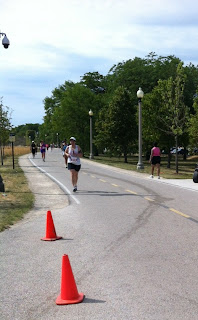 Mission accomplished! I completed the half marathon!

My main goal was to finish. Check. I had several time goals: ambitious, realistic, and easily achievable. The ambitious goal went out the window pretty quickly because the heat was rough. The race started at a Yellow event alert level, but that was bumped up to Red less than an hour in to the race. I definitely could have met or beat the realistic goal, but I was running with two women from my training group and one of them was really struggling in the heat. Between mile 4 and mile 5 she needed to slow down, so we changed our game plan to stick with her through the race. We shifted to 3:3 intervals, but even that was a challenge after a while, so we did a lot of walking and ran when she felt like she could. We stopped at every first aid station for ice and had a few other stops as well. But we completed the race, and we did it together.

Here are the splits. That was probably a slightly faster start than it should have been, but in the moment I felt good that I was not going out too fast. In fact, the beginning of the race felt so good, I came up with an on-the-spot mantra for the race: "I could do this all day." I really felt like I could and kept telling myself that throughout the race.


One of the coaches from our training group gave us our medals, and I admit that I got a bit choked up in that moment.

I'm not sure if I'll do another one. It's not highly likely, but never say never. Plus, I have to admit that I would love to do one in cooler temps to see what I could do time-wise.

I'm feeling surprisingly good post-race. I think some of that came from not pushing as hard as I could, but also from good training and lots of hydrating.

Here's a picture of me with my medal after the race! 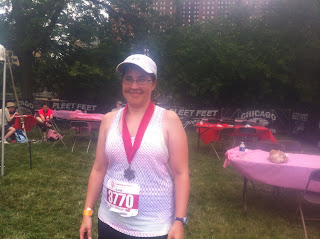 As I am typing this, I am exactly one week away from the start of the half marathon. I alternate between being really excited about this to really scared. "What was I thinking?" is a constant refrain in my head. I try to replace it with positive thoughts, but that is challenging.

I've done the training, I have a plan, and I can do this. I want to be able to embrace and soak up the experience. Fingers crossed for that and for cool(ish) weather!
Posted by LDA at 7:05 AM No comments:

Becoming One of "Those" Runners

Training for the half marathon has done a lot of good things for my running, but possibly the most amusing (and, admittedly, proud) developments is that I am now, somewhat regularly doing things that I thought only hard core runners did.

Most notably, about a month ago I ran a 10K. However, the training plan schedule had us running eight miles that day. So after a hard, hot 10K (which will get its own post at some point) I regrouped while attending the awards ceremony, got some fluids, and then headed back out to do two more miles.

Similarly, a few weeks ago, I had an hour long run on tap for the evening. It was raining lightly when I left the house, but the radar looked promising. Wrong. The rain increased to a steady, albeit not heavy, drizzle. I logged my time, doing the whole run in the rain, which is something I'd never done before.
Posted by LDA at 6:20 PM No comments:

My training is paying off in spades. I got a PR in the Run for the Zoo 5K and, unless the course markings were way off, managed a monster negative split on the last mile.

Here's a picture of Alex and me after the race. 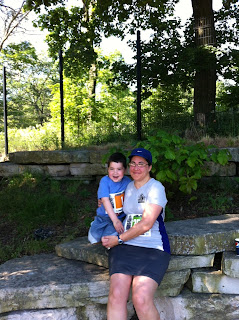